Today we would like to tell you about Molise! A timid Italian region, less known, but with strong Christmas feelings and traditions.

These traditions, all with centuries-old origins, are numerous and suggestive and each year attract visitors from all over Italy.

Christmas in Molise is the richest period of excitement and nostalgia for the past. A past represented by zampogna (bagpipe), authentic symbol of this region. The characteristic sound of zampogne invades big and smaller towns, bringing a magic atmosphere and serenity. This bagpipe is not just a musical instrument but an ethnic symbol, which binds the population of Molise and its history in an indissoluble way. Zampogna in Molise is associated also with Christmas, a period when the bagpipers go door to door playing Christmas songs. It corresponds to the last nine days before Christmas, the bagpipers perform in fact the Novena, a beautiful piece of music called also Pastorella. 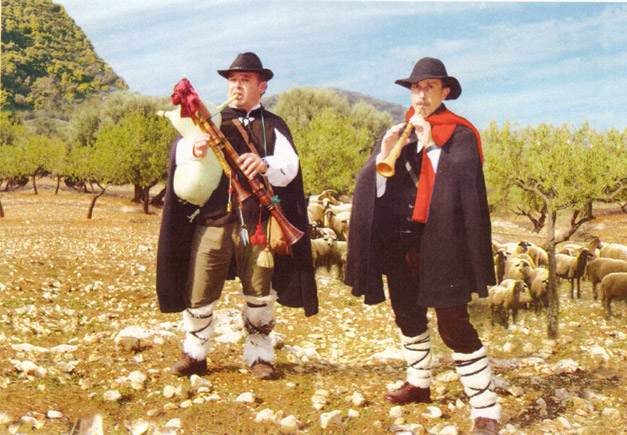 In Molise there are also many enchanting events, some of those a mix of the profane and the sacred.

The most spectacular one takes place in Agnone, a little inland town, and it is called ‘Ndocciata. Agnone can be an unusual and interesting Christmas destination. It has an old history linked to different influences from the Samnites to Venice, Angevin and Aragonese, called the “Athens of Sannio” because of its vibrant culture and monuments.

A rite created by Samnites to drive away the darkness of winter, in the Middle Ages became a sacred festival. On the evening of 24th of December at dusk hundreds of “holders” of torches gather at the northern entrance of Agnone. A giant “river of fire” lights up at the stroke of the biggest bell of Agnone, placed on the highest steeple of the city, the bell tower of St. Anthony. Then the streets become silent and the procession of the holders in their cloaks starts while scenes of peasant life animate the streets. The river of fire becomes amazing as the town catches fire. First come the “bearers” with eight torches, and then the “fans” with 10, 12 even 20 huge torches on fire: young and robust people, those who want to demonstrate to women and their “rivals” to be the best. 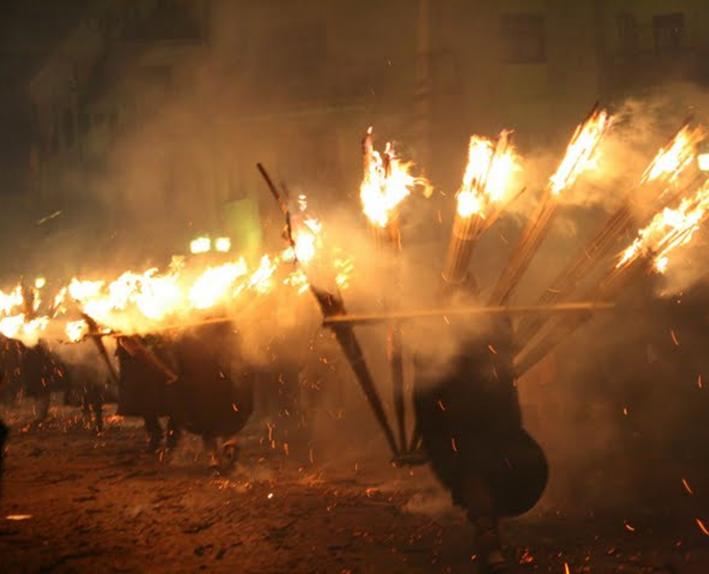 It also commemorates the long walk of the shepherds and peasants wrapped in their long robes coming in town on Christmas night for the Midnight Mass, illuminating the dark trails. The ‘Ndocce have a height of over three meters. If assembled assume the characteristic fan shape or radially. The ‘ndocce are made of fir wood collected from the surroundings. It derives from the dialect word ‘ndoccia, a term which indicates a large flashlight. The logs are cleared of bark and cut into thin strips about a meter and a half long, tied together in a bunch and stacked up to the height of several meters. This overlap of strips is enriched in its interior from dry stalks of broom, that will burn the ‘ndoccia characterizing the ritual also soundly with their crackling.

It is a rite belonging to rural tradition and while the flames spread, farmers were trying to draw important signals about the crops and the new year, interpreting the wind direction, the crackling of the torches and other elements considered essential at the time. Take part in the ‘Ndocciata was also a way to impress the girls and lovers, carrying a sparkling ‘Ndoccia under her window the girl could answer looking out, and demonstrating so her consent to the marriage, or throwing a bucket of water over the flame in a clear rejection. 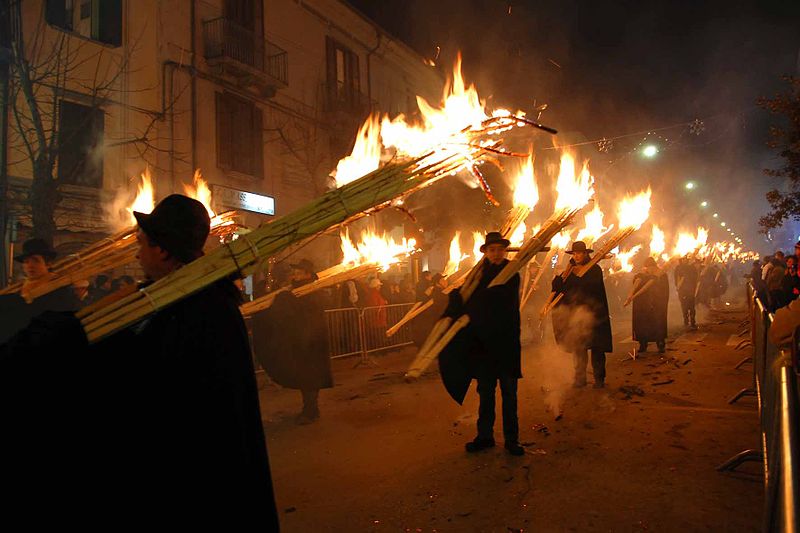 Agnone can boast of being the cradle of the bell industry: with its thousand years of history, the Pontifical Foundry Marinelli is the oldest, certified, bell industry in the world. 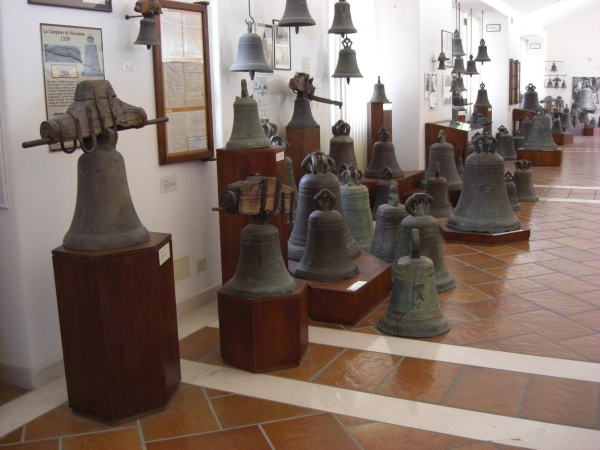 On Christmas Eve in Oratino, an event called “La Faglia” takes place. Among the Christmas traditions of Molise, the Faglia is certainly among the most ancient and challenging. Unlike ‘Ndocciata, in which the torches are numerous, here a single large candle made of dried reeds and almost 13 meters high is built. It is carried on 40 people shoulders from the town entrance to the mother church and set on fire in front of a crowd. The Faglia of Oratino has peasant origins and beyond to celebrate the traditional worship of the fire, in common with the ‘Ndocciata, it celebrates the birth of Baby Jesus, enriching thus also a religious meaning.

The tradition of recreating a living nativities in Molise is very old. The magic of the live nativity and its original features in Molise is the result of a great partnership between local inhabitants and a large involvement by the younger population.

In Guardialfiera the XXX edition of the traditional “Living Nativity Scene” comes alive in his old town centre. It is among the historical cribs of Molise. The aim is to lead visitors in Bethlehem of 2,000 years ago, making him the viewer and character at the same time. The “Pilgrims” walk to the ascent of steps admiring the representation of ancient trades, some of which actually reproduce the making of pottery, kitchen utensils and wooden stools. In one scene a stonemason workes the hard stone like centuries ago. The visitor is accompanied on the journey by Christmas music and also by the sound of bagpipes on the day of the Epiphany. At the end of the climb after having observed and participated in over 30 scenes and met about 140 characters, you will arrive at the foot of the ancient cathedral of Guardialfiera, where the Romanesque crypt welcomes the nativity.

Even in San Polo Matese an antique Nativity takes place. More than 20 scenes recited by costumed characters, all studied in detail and surrounded by the melodious sound of the bagpipes of San Polo.

In Gambatesa there is a singular tradition. While all over the world to make the New Year’s greetings we use letters, postcards, phone calls, text messages, email, in this small country of Molise people brings wishes to homes in the form of improvised and custom songs that make irony on each individual recipient. Both men and women of all ages, organized in small and strange varied music groups, door after door sing teasing their fellow villagers.

It’s time to leave Molise now and off we go to the next stop!