And here we are in Campania! A land rich in Christmas traditions with a strong sense of family and joy.

In Campania first of all Christmas means to be seated around a table with family. It is one of the most anticipated moments and emotion of the entire year, an essential ritual. There is no escape, at Christmas home is the place to stay. In the company of your family to eat, drink and play. Everything must be perfect, table setting takes on a lively tone; mistletoe, angels, coloured napkins and many many dishes. A proper tour de force filled with joy. The festivity, or better, the festive season, witnesses the fervent preparation of the two main meals: Christmas Eve Dinner and Christmas Lunch; on St. Stephen, the 26th December, usually people feast on tons of leftovers from the two days before.

When speaking of Christmas in Campania immediately thoughts also turn to the traditional and historical crib. In most of the towns there are organizations and groups of people that every year repeat the ritual of setting a nativity scene. The crib was and remains a way to represent not only the sacred but also the realism of everyday life. In Campania, the crib is more than a tradition. It is part of everyone’s life, it is an act of faith and a time for family and social gathering. 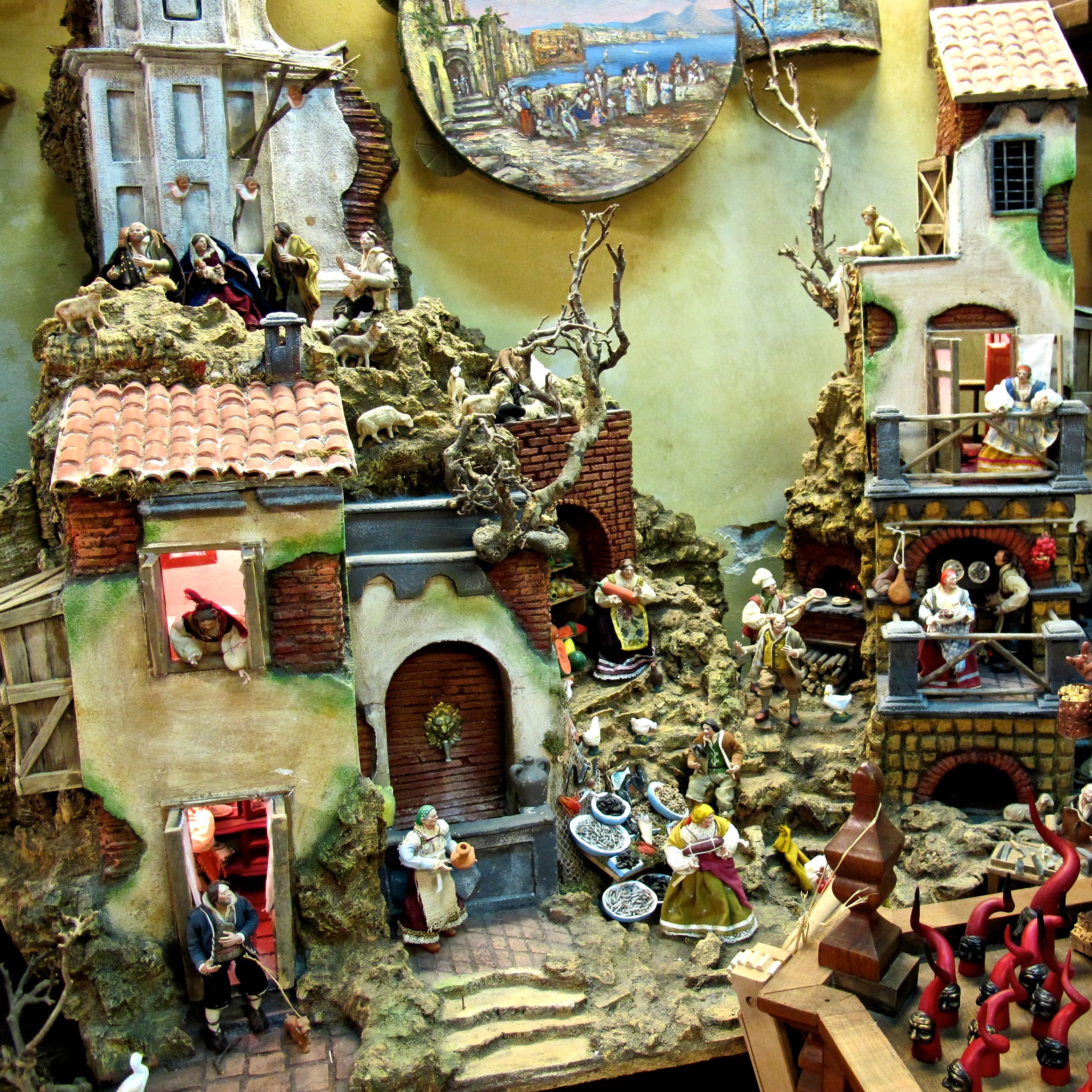 The first place where to enjoy Christmas in Campania must be Naples. It is a special place with a breathtaking beauty and uniqueness. Full of contradiction, between spirituality and passion.

Here the tradition of cribs is so felt that an entire neighborhood works all year on creating nativity scene settings and figurines. The nativity scene in Naples has ancient origins: deeds testify to its presence, in Campania, already during the eleventh century and in 1340 when the Queen Sancia of Aragon (wife Robert of Anjou) gave the Clares a crib for their new church. But it was in 1700 that the Neapolitan crib reached its peak: the nobles and wealthy bourgeois were competing to set up the more and more valued scenic installations and in any self-respecting noble living room, there was one exposed.

However, over the centuries, it was no longer represented only the cave of the Nativity, but also the profane world outside. In pure baroque style, they spread the representations of taverns with fresh meat well exposed and the baskets of fruit and vegetables, the shepherds, peddlers, animals. The true scope and cultural legacy of the Neapolitan crib reside in the realism of his representations. It is no longer only a religious symbol but a descriptive tool, identifying and unifying of their community, in its detailed composition.

The place in Naples where to find nativity scenes masterpieces is the characteristic San Gregorio Armeno in the historic center. A walk down this road is an extraordinary experience, tens of shops show sacred images and personalities who will eventually be placed in the crib. Thousands of statues of shepherds, farmers, inn-keepers, bakers, butchers, fishmongers, washer women, tables, chairs and all kinds of tools reproduced in miniature version to embellish and to add originality to the most important Christmas symbol in Naples. In the past, as at present, many people of this neighborhood become sculptors and artisans model makers creating a nativity scene placed in the Naples on ’700. The only way to visit San Gregorio Armeno during Christmas time is to make your way through thousands of people, spectators and buyers who crowd there in drones and who, in any case, make the experience even more unique. 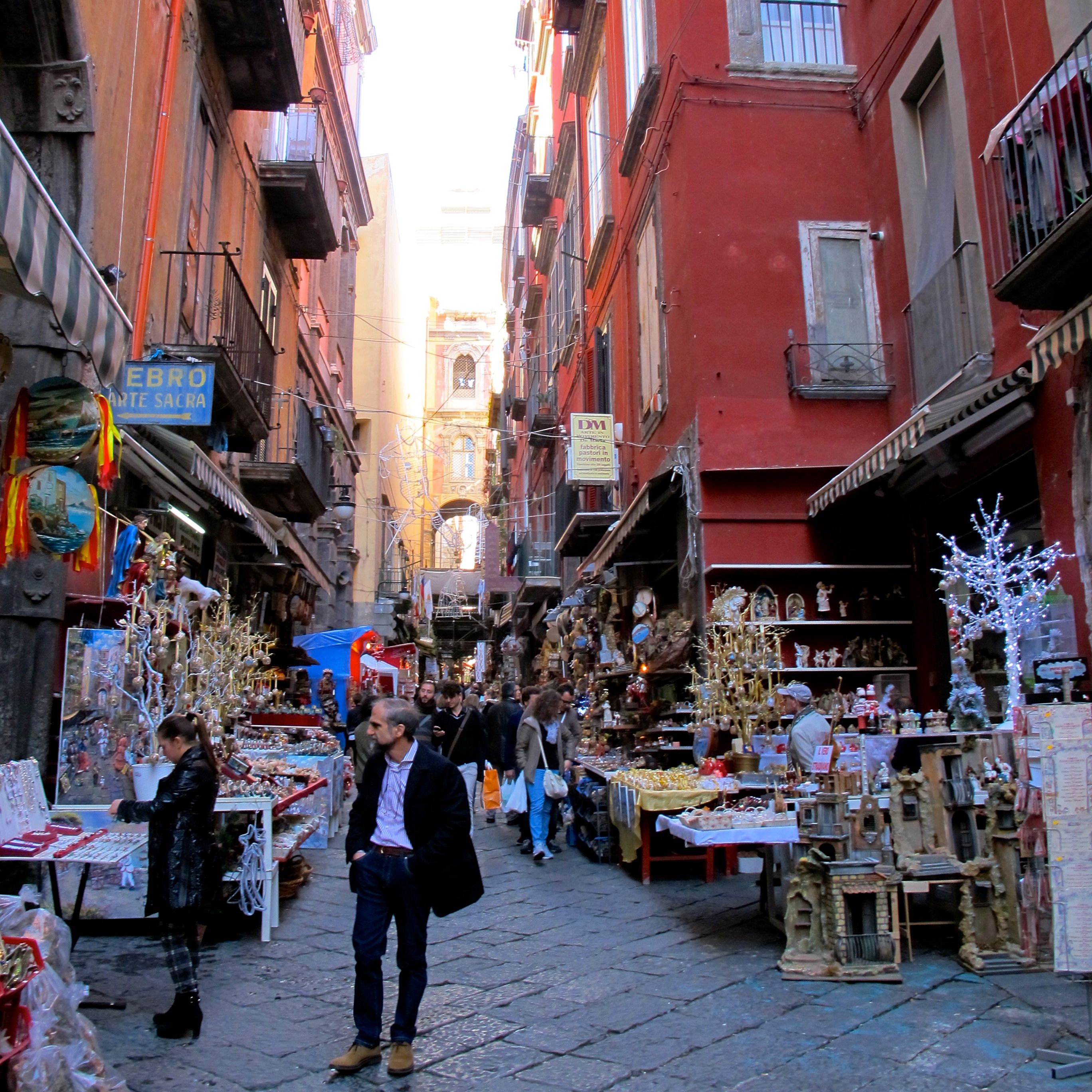 Following a trail of unique nativity scenes we like to mention the underwater crib in Conca dei Marini a few km from Amalfi. It has been created in the 60s by people who wanted to dedicate it to their loved ones disappeared at sea. The first ceramic statues were cemented to the bottom of a cave. In 1992 they were replaced with the current glass resin ones. Now it is almost 50 years that divers dive the night before Christmas to pay homage to the crib.

In Amalfi a suggestive event happens on Christmas Eve. A lighted comet star falls slowly of the Amalfi Coast: the cluster of houses in the San Antonio district all the way down to the pier of the marina. This ritual ended a decade ago, since 2009 the Amalfi comet no longer shined as had happened instead continuously for decades when that beam of light slipping on a steel wire across rooftops and terraces before stopping in front of the cathedral. But this year the district San Antonio will re-ignite the light of Christmas.

Salerno is the town that has brought the tradition of Christmas lights to a higher level thanks to its quirky and creative show called Luci d’Artista. The atmosphere is fantastic and a magical show of lights and colors catapults the viewer into an enchanting world. The Luci d’Artista of Salerno are real works of art installed in the most beautiful and attractive areas of the town attracting hundreds of thousands of visitors from everywhere. There is also a charming and traditional sand cribs (Sand Nativity) exhibition. 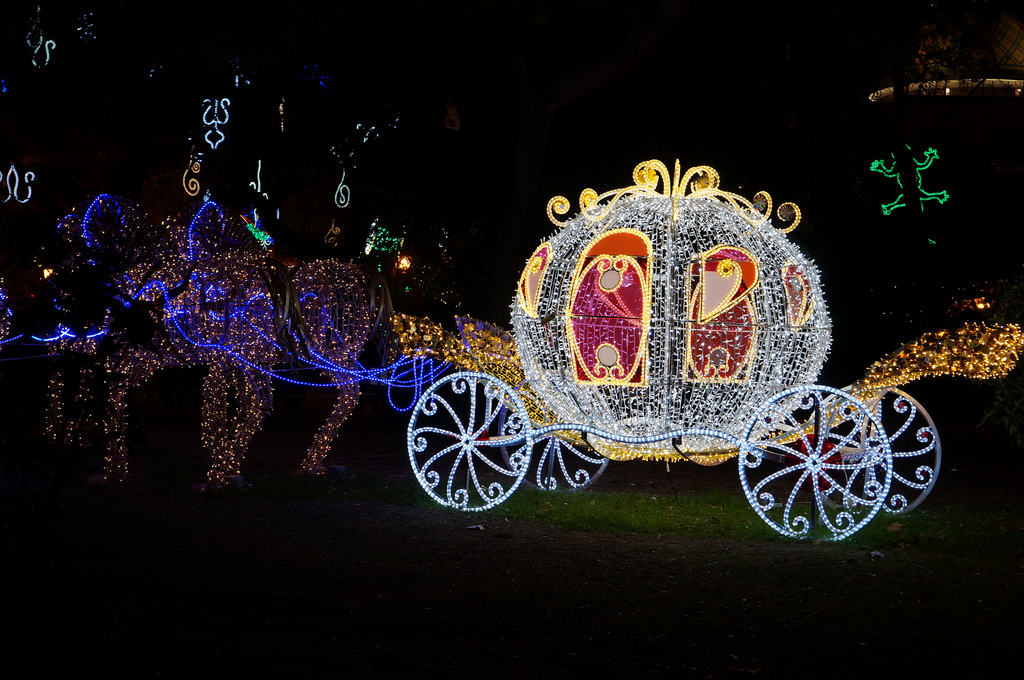 Curious are the celebrations the little inland town Sirignano. In this town for over a century the magic of Christmas recurs twice a year. Not only on the 25th of December but also on the 30th of November, the day of the commemoration of St. Andrew the Apostle, Patron of the town. The history of this double celebration is to be found in an unexpected gift that a priest, Francis Fiordelisi, organizing the feast of the patron, gave to the poorest. Fiordelisi decided to buy and make gifts to needy families in the town of some packages containing fresh anchovies, as well as to allow them to celebrate the festivity. A gesture that touched people, who considered him a Christmas gift came early. And it seems that from this moment in the homes the population of Sirignano celebrate a so called Little Christmas.

It’s now time to leave Campania to move south to the next stop.